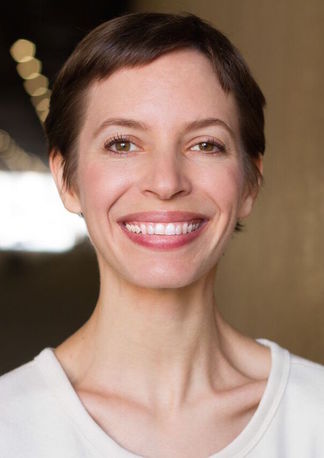 JOCELYN KURITSKY.
​
Hometown/Where did you grow up?
I was born in Albuquerque, New Mexico. My parents both work in public health, and after I was born, we wound up bouncing around the States. When I was 7, we moved to La Paz, Bolivia, and we spent 6 years there. Then I went to high school in Atlanta, Georgia.

Describe your career in 25 words or fewer.
The pursuit of experiment.

When did you first know you wanted to be an actress?
My mother participated in a production of Neil Simon’s Plaza Suite with her work colleagues in La Paz. I was maybe 8 or 9. I don’t know if I even knew what a play was, and I had never seen a play before that, but I thought the whole event was so cool. I was captivated -- particularly by my mother’s ability to inhabit someone so different from herself. I was so curious about that transformation, and that core curiosity continues to drive me.

Why is acting important?
I think acting is as close as we get to really understanding other people’s feelings, intellect, and circumstances. It’s an incredible art form that way. I also think, whether or not someone is a professional actor, the exercise of acting builds empathic ability like nothing else.

Also... When I was a kid I had this, like, hyper ability to focus -- which you’d think would be a good thing -- but, for me, for example, I would get stuck in the details of what I was engaged in, whether it was a story or a math problem, and I’d lose the thread. My way out of that ‘hyper-focus’ was to make it three-dimensional somehow. I would act out parts. If I could construct narrative and get on my feet in some capacity, put it into my body, that was how I could teach myself to integrate information.

What was your training (if any)?
When I was in high school, I participated in a variety of shows in a then-nascent program at the Atlanta International School. I had a wonderful drama teacher named Sherri Sutton, and she supported my interest in all kinds of roles. I got to play Puck in A Midsummer Night’s Dream, Airie in The Robber Bridegroom, Fagin in Oliver! She gave me a lot of confidence -- she was a great listener and she engaged in a lot of dialogue with me. She would take my ideas seriously and honored my interest in gender-bending and playing against type.

And then, at one point, she said something to me like, “You are going to be so, so good.” My first thought was, “But I’m good now!” But at the same time, she had given me an inkling that acting was a developable skill. We as a culture tend to prize talent as something you just have, instead of a set of skills you grow over time. It’s very dis-empowering to think, oh you are what you are, no amount of work is going to change that. So in saying that to me, Sherri gave me a sense that I had a good work ethic, that I could trust that I would grow and improve if I kept working hard.

So, then, in college and post-college I trained at the American Academy of Dramatic Arts in California and at the O’Neill National Theater Institute. I took on a variety of internships and assistantships, among them work at New Dramatists and The New Group.
​
I was also a member of The Bats at The Flea in NYC early in my career -- I was with them for about two years, and met a lot of the people I work with now. I met people who were in a position to give small opportunities to young actors; but I also met writers and actors and directors who were my peers. We have all kind of come up together. The bulk of my career I would say has come through connections I made there. And the rest of my training has been lots of trial and error in the real world of pretending.

Do you have/have you had a support job? Are you supported in other ways?
Yes. I have had a concurrent career as an ESOL  (English for Speakers of Other Languages) instructor. My family also helps me out, and I am so, so lucky they do. They support me financially at times, and they’re my emotional bedrock.  It’s definitely not always an easy negotiation, but this life would be so much more challenging, & perhaps impossible, without that love and support.

How do you approach auditions? (Both the art-work and the game of it.)
Auditions are so weird, like online dating: it’s good to do it, it’s good for you -- like exercise -- but ultimately it’s not how I come to most of the projects I’m involved in. Auditions are an imperfect system; but until someone comes up with a better system, they’re what we’ve got.

Every audition is so different for me. Sometimes I prepare a lot. Sometimes I spend hours digging through a text and working out the mechanics of a role. Sometimes I just show up and wing it. But no matter how anxious I get, I often try to remind myself that I’m also auditioning the people behind the table: Do I want to work with these folks?

Actually, I think Tony Roberts, a friend and mentor (we met while I was assistant-directing a show he was in), gives some amazing perspective re: auditions. Check out this interview if you’re interested. I love what he has to say.

How do you deal with rejection?
Rejection is very multi-faceted -- there are gradations of rejection. Depending on the circumstance, I deal with it in a multitude of ways.

For me, the worst kind of rejection, the rejection where you really have to go buy yourself a milkshake later, is the kind where you feel the potential creative collaborators are apathetic. That really bugs me. I have very little bandwidth for creatives who invite me to audition and don’t, for example, take a moment for basic introductions. I don’t have a lot of patience for disinterest. Politeness and engagement go a long way; and, I think we tend to excuse this industry’s bad behavior a lot, but to me, manners are manners, and successful auditions take good energy from both sides of the table.

I’ve also learned that when a creative team is genuinely enthused by what they are doing, they tend to treat their potential acting collaborators with a lot more openness, enthusiasm, and respect. When you go to meet people and they’re excited about what they’re embarking on, they tend to be excited to meet you and play with you. To me, every meeting or audition, no matter where a team is in the process, is a great opportunity to discover. So, I don’t like it when that opportunity is missed. More here!

All said, the best kind of rejection is when a producer, writer, or director tells me that they don’t think I’m right for a project, but they still have great appreciation for me & my work. One of the best letters I ever received (EVER) was a rejection from RJ Tolan and Graeme Gillis via EST’s Youngblood. I had applied one year as a writer, and they wrote me the most thoughtful, kindhearted rejection (and I don’t think I’m special -- I think they treat everyone this way!). In fact, that letter might have been better than any acceptance letter I’d ever gotten, too.

What is your super-power? (e.g., especially good at dialects, crying easily, singing, being funny, clown, playing the trombone? Directing? Writing?)
I think my superpower is my ability to connect with lots of different types of theater/entertainment artists. Some connections come easily; and some -- many -- do not (it's taken about 3 years to figure out how to launch The Muse Project). Part of what makes it a superpower is that I’ve grown an ability to power through the fear around asking and re-asking for connection.

I am very curious about how connection facilitates collaboration, and then art. I have a lot of affection for many different types of styles and aesthetics and points of view. I am very interested in & committed to finding common ground with a variety of people. And even though I am deeply introverted, I love learning about other artists, and so I love networking. I have become a master flirt. That might sound a little crass, but I am enthralled by what other people are curious about, and I flit from perch to perch gathering information and learning and thinking about how we all fit, and I continue to persistently build upon those flirts, gently and steadily as I go. I'm ultimately interested in diplomacy, and how to build perches I can eventually live in with others.

Advice or inspiration?
Yeah. Ask to be seen.

How did you get your very first job? The last job you had?
I got my last project through my network. It was a project called Sanctuary at Arena Stage, written by Caridad Svich. Caridad was also the first person to hire me in New York while I was interning at New Dramatists around 2005 or 6.

Why do you think theatre is important?
Maybe this comes from my parents, but I see theater as a social justice cause. I’m always asking myself, “What is the purpose of this project or story or moment? What am I trying to do? What is this saying to an audience right now at this point in space and time?”

With Muse, I’m interested in shifting what we collectively think acting is. For me, acting is not just about filling a role -- that’s not why I do this. If someone is going to pay me a ton of money to say some lines, that’s fun and I’m down for it, but I think the greater career I’m after, the greater work, is much more participatory.

Actors contribute so much to a narrative, to how we make a story. It’s collaborative. I think acting is the process of moving a story from a concept on the page into three-dimensional form, and that process fascinates and compels me. I am very interested in the journey of collaboration, and figuring out how to exist in space and time with myriad other perceptions.

Even if I’m thinking about my individual character, it’s always in the context of the whole story we are telling together as a team. You don’t act in isolation. You have to interact, with people, with the story, with multiple character arcs.

I need to be able to engage with my collaborators freely -- I’m not confrontational, but I say what I think and feel, and I think collaborating artists, ultimately, not only respect this, they seek it.

Plugs!
THE MUSE PROJECT!
This interview was conducted by Kyra Miller. 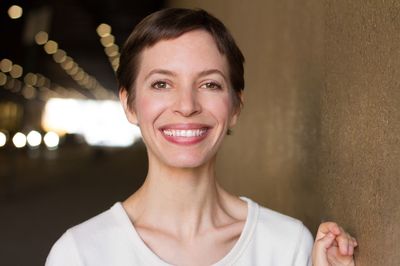 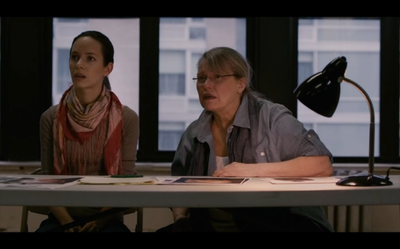 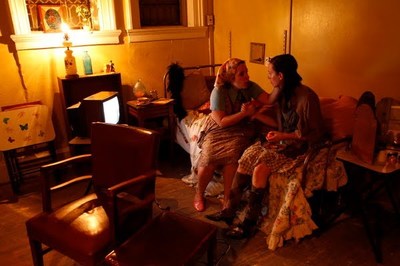 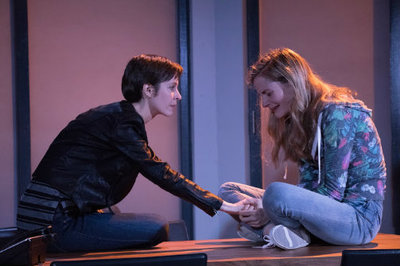 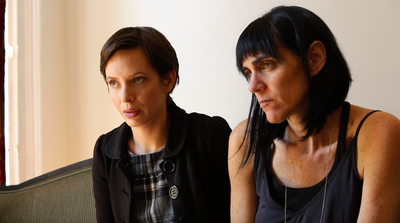 Jocelyn & Leigh Silverman in pre-production for Neil LaBute's Over The River & Through The Woods. Photo by Anna Rooney. 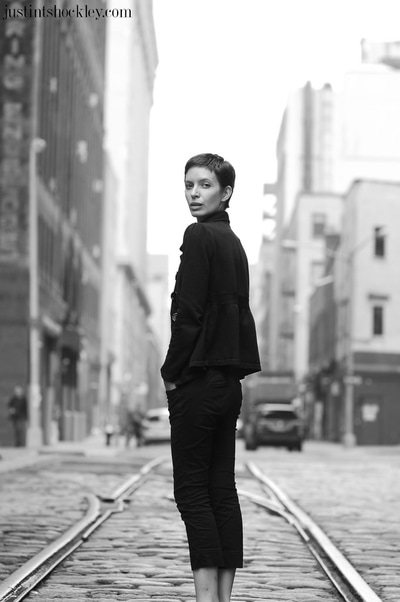